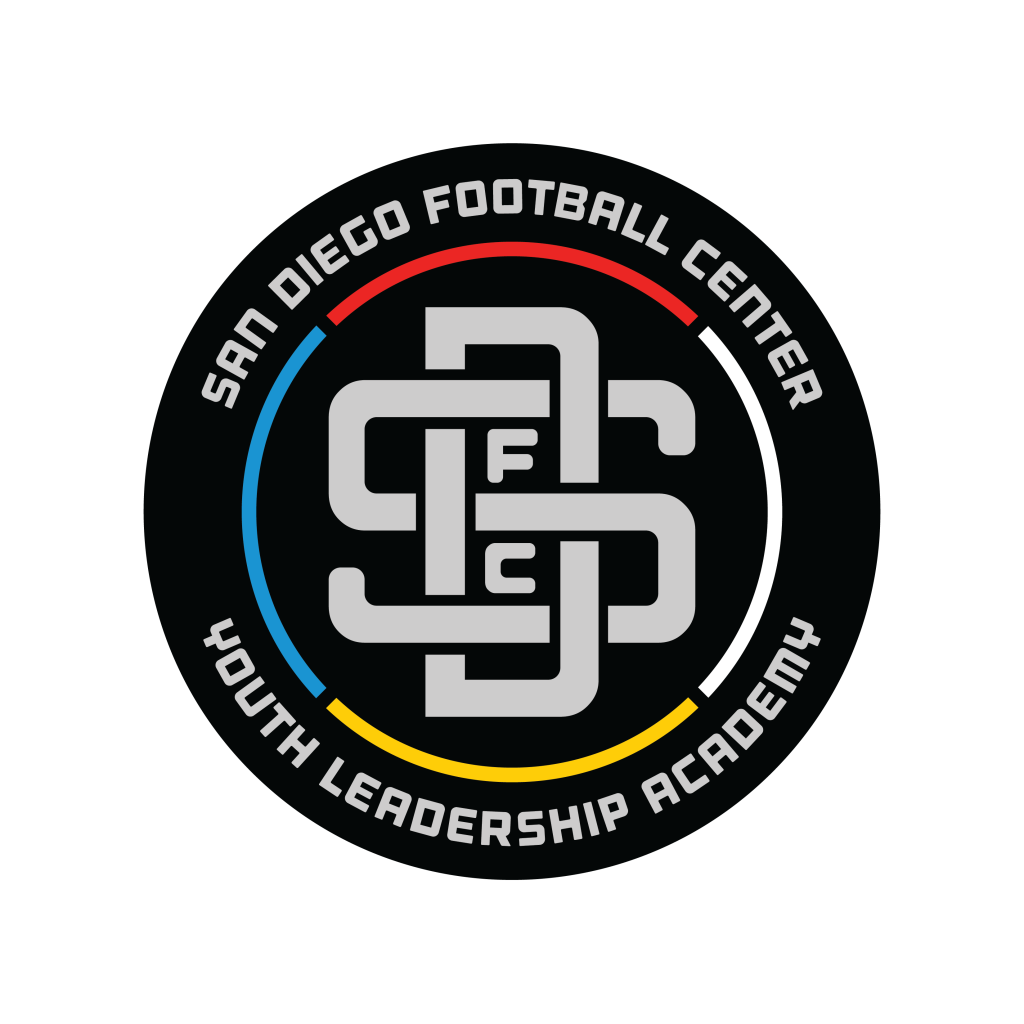 SDFC curriculum helps players become the best they can by promoting individual’s creativity that serves the team. Most people think of creativity and see Neymar, Ronaldo, dribbling, flavor and moves, feints, scissors, etc. Creativity is simply making the right decision by using outside the box thinking. This is what separates great players from average players. Creativity is Thomas Edison. We had candles, we had mail, why did we need electricity or telephone?

SDFC curriculum and methodology looks at soccer training with a new set of lenses:

“We can differentiate among traditional analytical training where the different factors are trained in isolation, the integrated training, which uses the ball but where the fundamental concerns are not very different from the traditional one; and there is my way of training, which is called Tactical Periodization. It has nothing to do with the previous two even though many people could think so.” (Mourinho, J. in Gaiteiro, 2006)

Just a disclaimer, the following is not for all parents. We understand that the goal is to help players become the best they can. However, we do have many soccer sophisticated parents and/or those who are always in the quest for soccer knowledge. That is why we have decide to share a bit more about our methodology only from a 30,000 ft. view in order to help you understand where we are coming from and where we can take you and your player.

The tactical principles of play refer to a set of match-play patterns that a player must adopt at any of the four moments of the game. This is the Game Model. Given the high unpredictability that exists during a match, we try to create predictability through preparation, planning and training.

Accordingly, every training session is designed to ﬁt the player personality and our game model. The systematic repetition of the tactical principles of play should enable the players to control the game, being proactive vs. reactive to the game. . Creating habits is possible only when the brain has experienced the same or similar situations and has “recorded” them.

The work of Haggard & Libet (2001) showed that the brain prepares movement responses long before a person is aware that a movement will occur. Actions and decisions that are taken daily, that seem to be conscious and instant, are in fact the result of subconscious processes in the brain. Thus, through these habits, decision and reaction times can be reduced substantially (McCrone, 2002).

Click on the link above to view the PDF and learn how we use Victor Frade’s Tactical Periodization Model to create our methodology and combine multiple sources of information in order to create complete players. You will see that putting together just ONE exercise takes massive amount of time and resources if the goal is to customize training session.

Otherwise, one can take a look at a bunch of Youtube videos or use cookie cutter training sessions that were built for different countries, teams, players, levels and ages for marketing purposes and impress parents.

The key point in any methodology is to have a roadmap, a complete process in order to help EACH player go from point A to point B. 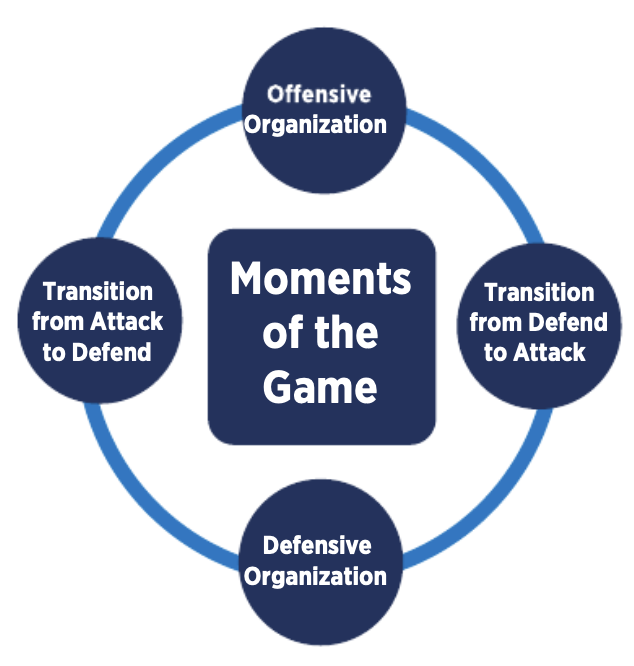 SDFC considers Chaos Theory, Fractal Theory and other Chaotic Complex Principles in order to create a simple to understand and implement player development model. The Chaos Theory in Soccer  deciphered into comprehensible, teachable pieces.
Every game action, regardless of the four moments of the game in which it might happen, involves a decision (tactical dimension), an action or motor skill (technical dimension) that required a particular movement (physiological dimension) and is directed by volitional and emotional states (psychological dimension) (Oliveira, 2004).
A good soccer player is an individual able to select the most appropriate action to respond to different game scenarios, and these actions are always determined by a tactical context (Garganta & Pinto, 1998). Accordingly, the tactical dimension should be the dominant training component.
For example, the concept of “speed” would change to relative speed. However, the tactical dimension does not exist by itself; it makes sense only when it occurs through the interaction of the other three dimensions (Oliveira, 2004).
This implies that the tactical, technical, physiological and psychological elements are never trained independently. Everything is included, with the main concern being that every exercise is organized around (at least) one of the four moments of the game and the tactical principles of play. 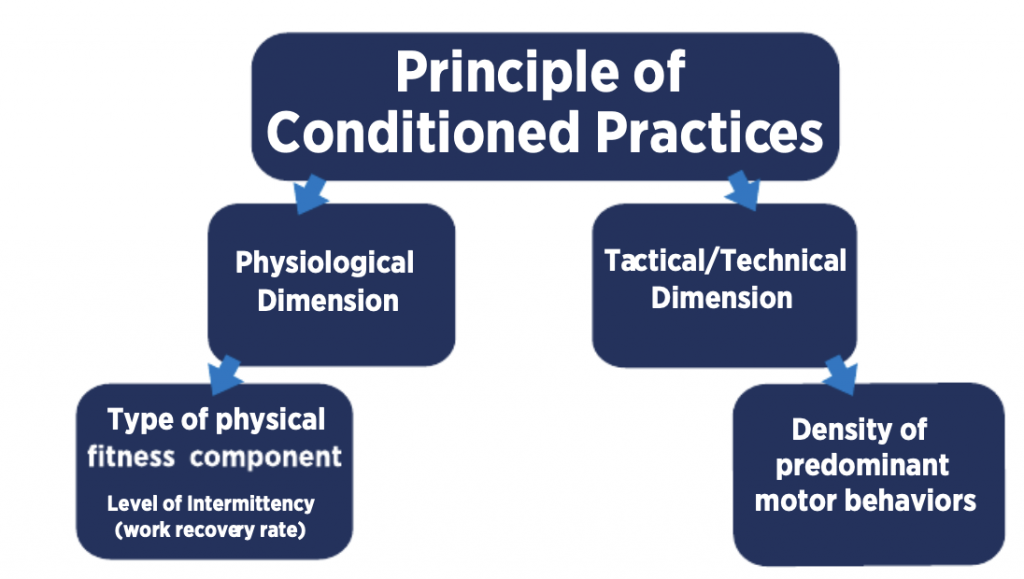 When the aim is to teach or improve a particular principle or
sub-principle of a game model, the best way to do it is to create appropriate exercises. Then, if we are interested in certain behaviors related to a given principle of play, we should make them appear more often than others in the exercise.
As such, the requested behavior has to appear more frequently than
during the formal game, enabling players to create mental images about the desired target. Thus, the conﬁguration of the exercise (e.g., playing space, number of players, rules, objectives) must promote the appearance of the required behaviors, what are called “conditioned practices”.
For example, setting up an exercise where a team’s defensive sector is under-loaded and is constantly defending will make behaviors related to its defensive organization emerge. Then, there will be many opportunities for coaches and players to “shape” these behaviors.
This principle relates to the hierarchical organization of the principles and sub-principles of play. It has nothing to do with a general to speciﬁc progression, from volume to intensity. For Tactical Periodization, the concept of progression is built around the acquisition of a certain way of playing. This progression appears at three different levels of complexity: during the season, throughout the week (taking into account the last game and the next one) and ﬁnally during each training session, thus becoming a complex progression where each level is related to the others.
According to Frade (2004), at the early stages of the training season we should introduce the general principles of play (related to four moments of the game—defensive organization, offensive organization, transition defense-attack and transition attack-defense).
If players know and can explain when to apply the principles of play relative to each moment, it will be easier for them to assimilate the speciﬁc principles that each coach has in a game model. In a second phase, we will work on the speciﬁc principles of “our” model of game. At this stage we can distinguish two moments.
The ﬁrst: the defensive organization of the team, which we will begin to work with. According to Tactical Periodization, it is preferred to focus ﬁrst on defensive organization, because by having a good defensive balance the team will gain conﬁdence and consistency, enabling coaches to progress into other game situations (defending properly to attack even better).
In addition, to defend is “easier” than to attack. Then, coaches will move to more complex behaviors, such as the offensive organization. The transitions are key in soccer, so coaches should try to train them from the beginning. They will obviously be linked to the team’s defensive and offensive organization.
To understand the entire logical structure, we should link the Principle of Complex Progression to the Principle of Horizontal Speciﬁcity Alternation. We refer to a “building up” and “disassembly” of the principles and sub-principles and their hierarchy inside the weekly plan and over weeks according to the evolution of the players and the team. This methodological principle has two levels of planning which interact with each other, the short-term (game to game) and medium- and long-term (style of play/game model).